The total number of students sitting PRINCE2 exams in Germany grew by 22% in 2010 compared with the previous year, and grew by 31% year on year in 2011. Based upon figures for Q1-Q2, it is expected that record numbers of students will take PRINCE2 exams during 2012 in Germany.

The breakdown of the figures (see figure 1) shows that in 2012, it is forecast that candidates taking PRINCE2 Foundation exams will be slightly less than in 2011. This probably reflects the slow German economy during 2012 compared with the previous year. 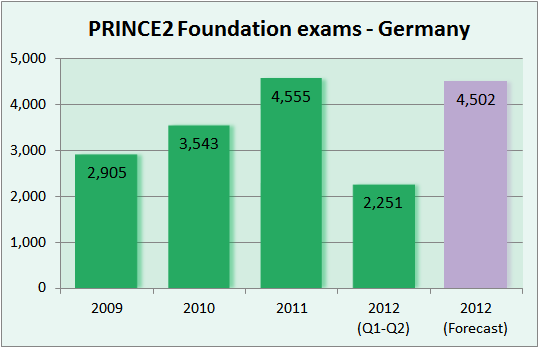 Expected numbers of candidates taking PRINCE2 Practitioner exams (see figure 2) are expected to grow significantly during 2012 however. This is partly explained by the fact that record numbers of students sat their PRINCE2 Foundation exams in 2011 and want to now obtain the higher Practitioner qualification. 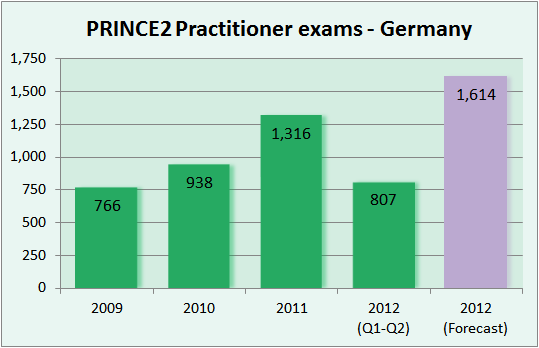 With the strong growth in the number of Practitioner examinations, the overall number of PRINCE2 examinations being taken in 2012 is likely to be the highest ever, despite the slowdown in the economy (see figure 3). 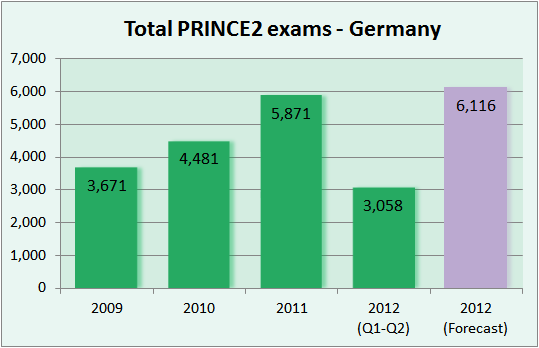 With the PRINCE2 examinations now being available online, it means that German students do not need to travel to the public exam centre in Köln to sit their PRINCE2 exam. Instead, a remote exam proctor can be used to enable students to take their exam on a computer at home.

With the number of PRINCE2 public training courses in Germany being limited, German students studying for their PRINCE2 exam are increasingly taking the option of studying online using an accredited eLearning PRINCE2 package.

Knowledge Train offers a full range of accredited PRINCE2 eLearning courses which come with exam vouchers to be redeemed when students book their exam online. The eLearning packages also come with the remote exam proctor which means the students can take their exam at home.

PRINCE2® is a registered trade mark of the Cabinet Office